Burning the bridge at Lick Creek
In November 1861, a talented potter named Christopher Alexander Haun—most often called ‘Alex’—lives in a part of Greene County known as Pottertown, a Unionist enclave in the Confederate State of Tennessee. Several other potters have their homes there as well, and they all use clay found near Lick Creek to make their wares. These are rural potters who run businesses selling their clay creations, often as a supplement to farming. Their finely crafted earthenware is still highly prized today. Alex Haun and the other potters staunchly support the Union.

7 NOVEMBER 1861
On the eve of the bridge burning, Jacob Harmon, also a local potter, visits his Unionist neighbors and asks for their help in burning the bridge. When Harmon knocks at Alex Haun’s door, he agrees to assist in burning the Lick Creek bridge the following night.

8 NOVEMBER 1861
On November 8, 1861, forty to sixty men, including Alex Haun, arrive at Jacob Harmon’s home and are immediately sworn into Company F of the Second Tennessee Voluntary Infantry Regiment of the U.S. Army. They then travel to the edge of Harmon’s farm, where the railroad bridge crosses Lick Creek.

The Unionists find several Confederate soldiers camping under the bridge and immediately take them into custody. The burners make quick work of firing the bridge. Other bridge burners force their captives to swear an oath to the Union and promise not to tell what they have witnessed that night, then releases them. They do not keep their word.

Arrest
Confederate authorities are livid at this guerrilla action from the Unionists of Northeast Tennessee, and they quickly strike back. Within hours of the bridge burning, the Rebels capture several bridge burners, including Alex Haun, aged 40, Jacob Harmon, 43, and his son Henry Harmon, 22. A Confederate court-martial at Knoxville finds these men guilty of treason for participating in the burning of the Lick Creek Bridge.

10 DECEMBER 1861
From the Knoxville jail, Alex Haun corresponds with his wife, Elizabeth Cobble Haun, trying desperately to prepare her for life without him and how to support herself and their children.

11 DECEMBER 1861
Alex Haun’s sentence is death. By hanging. On the day of his execution, he writes again to his wife. His thoughts are with her and their children, whom he knows he will never see again.

Haun then writes to Colonel Baxter, an officer at the Knoxville jail:

And again to Elizabeth:

Execution
Christopher Alexander Haun is hanged at noon on 11 December 1861 at the Knoxville jail, for treason against the Confederate States of America. His family buries him not far from the the Lick Creek bridge on Pottertown Road in Greene County.

Welcome to my blog! 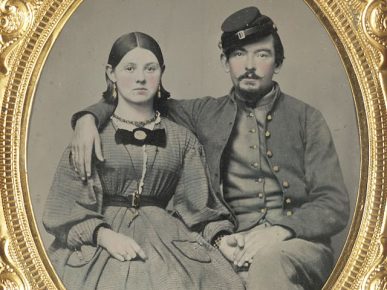